For the first time since the Cold War, the US is deploying an air defense artillery brigade into Europe. The 678th Air Defense Artillery Brigade arrived at Ansbach, Germany last week. 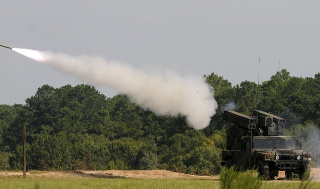 Col.  Richard Wholey, the brigade commander, says the move is an “historic” one. It is the latest in a series of moves to build up US assets in Europe related to talk of a new Cold War and mounting tensions with Russia.

Officials say the unit is intended to provide short-range air defense for other US forces in Europe. The US is seen as having far less such capability in Europe than Rusia does, though this seems only natural given Russia is physically in Europe, and all of their equipment is there.

Since the US rarely fights against enemies with airplanes, this was one of the least essential forces at the end of the Cold War, and unsurprisingly one of the first to be pulled from Europe during the drawdown. Their return doesn’t necessarily represent a likelihood that they’ll be shooting at Russian planes any time soon, but rather reflects continued hostility toward Russia, and a general buildup in the area.