According to Afghan officials, at least 48 girls from a high school in the city of Lashkar Gah are in the hospital today after an incident of suspected poisoning of their entire class. All are described as in “stable” condition. 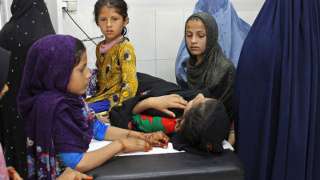 The girls are 11th graders in the Helmand provincial capital’s Central Girls School. Many were reporting headaches and vomiting originally, though the poisoning explanation appears to still be speculation, with no confirmation.

It’s also not clear who would’ve done this, though there are militant groups, notably the Taliban, who oppose education for women beyond a very basic level. Such a group cold well make such an attack to try to scare parents away from letting their girls go to school.

Investigations are still ongoing, according to officials in Helmand’s education department. The Helmand Province remains hotly contested, with the Taliban controlling much of the territory, but the government retaining control of the capital.