Israel’s violent crackdown on Land Day protests in the Gaza Strip left at least 15 dead, and large numbers of people wounded. There are a lot of expressions of concern, but one thing there won’t be is an investigation, by anyone. 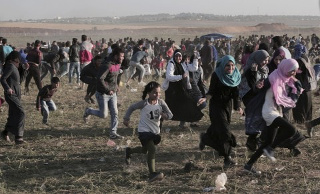 A resolution in the UN Security Council sought to call for such an inquiry, and also issuing a statement of support for the right to peaceful protest. The US, however, quickly vetoed the bill. This is unsurprising, as the US generally vetoes anything that has anything to do with Israel. US officials have so far reused to comment, because clearly vetoing a call to respect human rights, and not kill peaceful protesters, is something of an embarrassment.

There is more than a little disquiet within Israel as well, because of the perceived international fallout of the incident. The far-right government, however,  went into the protest with every intention of killing protesters. and Defense Minister Avigdor Lieberman has ruled out Israel ever having any internal inquiry on the killings.

So there’s no possibility of either an international inquiry under UN auspices, or a domestic inquiry from within Israel. While NGOs are likely to offer critical accounts of what happened, this is just the latest in a long line of instances of Israel killing Arabs with impunity.

And while that isn’t necessarily surprising, it could be a very bad thing not just for international standing, but for popular sentiment within Palestine. The killings drew thousands to the funerals of the slain, and while Israel threatens to kill more next time, the casual use of lethal force against demonstrators has a constant threat of blowback against the Israeli government.