While some French officials are denying reports that they intend to send troops to Manbij at all, Turkish officials are stepping up the rhetoric, warning that any French deployment of troops into northern Syria would amount to an “invasion.” 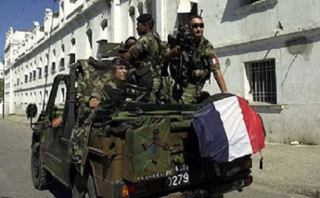 Since Syria has yet to approve a French deployment, that may well be the case. Turkey, however, is the wrong nation to be making such allegations, in as much as they are in the process of invading Syria already. Indeed, France’s deployment was, if reports are to be believed, being ordered specifically to counter the Turkish invasion.

Turkish DM Nurettin Canikli warned the French deployment would be a “calamitous step,” and that it would be in violation of international law. Other Turkish officials have suggested in recent days that Turkish torops would target the French forces in Manbij.

While President Macron’s office is now denying that any troops are headed to Manbij, France has historical ties to Syria, which would make sending forces to resist the Turkish invasion relatively unsurprising. US and British troops are already in Manbij, supporting the Kurdish YPG there.

Turkey’s invasion is focused on expelling the YPG from much of its territory in northern Syria. Turkish forces captured Afrin District in recent months, facing resistance from both the Kurds and the Syrian military. US troops were not present in Manbij, however.