Last week, President Trump told supporters at an Ohio rally that US forces could be withdrawing from Syria “very soon.” This was the culmination of behind-the-scenes administration debate on the matter, with Trump facing serious opposition throughout his cabinet. 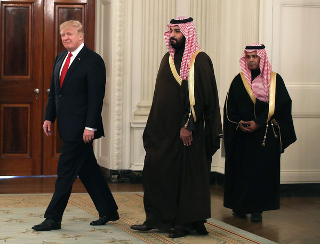 Trump’s interest in ending the ISIS war in Syria, on the grounds that ISIS is defeated, doesn’t sit well with a lot of Pentagon and State Dept officials, who see it, like Iraq, as an open-ended deployment. Saudi Crown Prince Mohammed bin Salman seems to be backing the establishment on the war, expressing opposition to the US pullout.

The prince’s comments mirror Israel’s stance on the matter, that an open-ended US military presence in Syria would in some way be hostile toward Iran, even though that’s not the war they’re supposed to be there for in the first place.

The idea that if the US stays in Syria long enough they’ll find an enemy to fight seems roughly in line with the Pentagon’s own position on the conflict, suggesting they need to stay beyond the destruction of ISIS in case they need to impose regime change, or fight Iran, or fight some other faction.

The prince sees it as clearly about Iran, however, claiming Iran would seize the “corridor” in eastern Syria currently under the control of US and Kurdish forces if the US leaves. This is couched as a “Shi’ite crescent” being established, another concept very Israeli in origin. The pushback from the prince likely adds more pressure to Trump’s plans for a pullout.