US-led coalition forces had a run-in with an improvised explosive device overnight near the northern Syrian city of Manbij. The attack resulted in the deaths of a US and a British soldier, and the injuries of five other coalition members, who have since been evacuated for treatment. 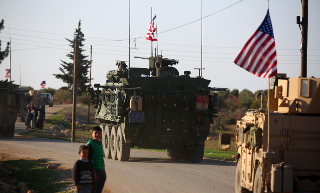 The exact details of what happened were unclear. The British Defense Ministry presented the operation as “anti-ISIS,” though there are not believed to be any ISIS forces anywhere near Manbij at this point. That doesn’t mean the troops don’t have enemies.

Manbij is a city held by Kurdish YPG forces, with US and British troops supporting them. Turkey is poised to attack the city, and Turkey’s allies in the rebel Free Syrian Army (FSA) have already had some skirmishes with the YPG on the outskirts of the city.

So while it’s totally not clear who is responsible for the roadside bombing, the FSA, whose factions in northwestern Syria include some al-Qaeda linked forces, are speculated as a possible culprit. That the US spent the earlier part of the Syrian War arming the FSA would make such an attack particularly embarrassing.

This is the first British combat death in Syria, and one of very few US deaths. With the fight for Manbij looming, however, the number of deaths could be poised to rise quickly.

One thought on “US, British Soldiers Killed in Northern Syria Bombing”