Despite the possibility of such incidents starting a huge regional war, Pentagon officials have been very willing to talk up a past incident of killing a large number of Russian military contractors working for the Syrian government. 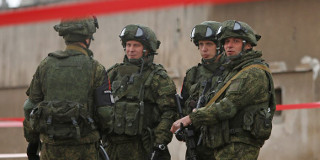 It was an isolated incident, for now, but Defense Secretary James Mattis reports that in the past week, the US almost killed another group of Russians along the Euphrates River. This was only prevented by a last minute intervention by the Russian military through a hotline.

The Euphrates River is supposed to be the deconfliction line between the two factions, but in some places, the Syrian government’s zone does give them both sides of the river. Since these lines aren’t all posted with signs on the ground, it’s easy for troops to get mixed up and stray across the zone some places. The US response was going to be to kill them all with airstrikes, as they had in the past.

The incident was related to the movement of the contractors through an area along the river. The movement was apparently approved in advance, but US officials changed their mind when they decided the Russians were getting too close to oil fields held by Kurdish forces.

Russia’s top military leader, Gen. Gerasimov called on the hotline, and he got both the Russian contractors to withdraw back across the line, and for the US-backed troops in the area to back away temporarily, and more importantly to not kill anyone.

This is likely to be an issue until President Trump’s promised withdrawal. US and Russian forces are in close proximity, and the Pentagon is given free rein to operate, which means they can strike on virtually any pretext.