The strategically located city of Manbij, along the Euphrates River, looks to be the next major battleground in Turkey’s invasion of Kurdish-held territory in northern Syria. Turkey’s President Erdogan has indicated that the invasion will happen quickly if the Kurdish YPG doesn’t leave the city. 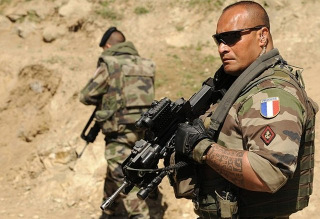 The reason Manbij threatens to be a much bigger fight than those that came before is that US ground troops are deployed in the city, allied with the Kurds, and might end up fighting Turkey, despite them both being in NATO. French President Emmanuel Macron is now talking joining the potential fight as well.

Macron, who met with Kurdish YPG officials this week in Paris, announced on Thursday that he will be sending an unspecified number of French Special Forces to Manbij to coordinate with both the US and Kurdish forces and “block” any Turkish advance.

The addition of the French troops to the battlefield adds to pressure on Turkey and their allies in the Free Syrian Army (FSA) not to attack Manbij. Erdogan, however, has repeatedly insisted he won’t allow anyone to block his attack on the Kurdish “terrorists,” and may feel just as committed, French or no French.

A fight involving three major NATO member nations, fighting against one another, is a potentially major regional crisis. It’s not clear how this will all shake out, but none of these sides seems to be looking for real compromise, and instead are all doubling down on troops deployments and moving closer to a confrontation.