The UN Security Council has issued a statement expressing “grave concern” over a weekend incident in which northern Yemen’s Shi’ite Houthis fired three missiles into Saudi Arabia. One of the missiles was intercepted by Saudi defenses, and the wreckage killed a civilian. 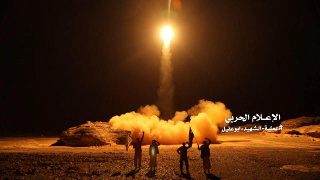 This statement of condemnation is particularly galling given that Saudi airstrikes have killed literally thousands of Yemeni civilians in the past three years since Saudi Arabia invaded Yemen, and the UN Security Council has never been able to successfully offer a statement faulting that.

Indeed, the times the UN Security Council got close to faulting the Saudis were including them on a blacklist of nations that deliberately kill children in war. That inclusion led the Saudis to have a very public fit, and the UN to retract the claim, despite it being plainly accurate.

This reflects the Saudis having two key allies, the United States and Britain, as permanent members of the security council, and willing to veto anything that challenges their narrative too hard. The US and Britain have both been involved in the Saudi invasion directly, and are both selling the Saudis billions in arms for the conflict.

The Houthis have access to the remaining missiles of the Yemeni military, and have fired a handful of them at the Saudis in recent months. The strikes have had limited impact, though they have led the Saudis to threaten to attack both Iran and Lebanon and various points.