Having delayed the start of the operations because of the Winter Olympics, military officials from the US and South Korea, the annual spring war games in South Korea will be held beginning April 1. Perhaps more interestingly, they will be smaller in scope and much shorter in duration than recent years, reflective of diplomatic progress on the peninsula, and an upcoming summit between President Trump and Kim Jong-un 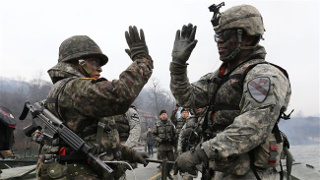 The Foal Eagle exercise is to last for only four weeks, and had previously been expected to extend deep into May, as the nations usually have the exercise take closer to two months. Key Resolve, the mostly computerized exercise, will begin in mid-April and last just two weeks, meaning everything will be finished before May.

This timing decision was likely to have been made because of upcoming Trump-Kim talks, which are not dated yet, but are planned to happen “by May.” Holding such talks amid US war games would be very difficult, so likely the summit itself will be shortly thereafter, in May.

The war games are also to involve fewer troops. While the Pentagon announced 11,500 troops, claiming that was a “similar scale to previous years,” it’s actually a fair bit smaller. In recent years, the US has sent 15,000 troops.

In addition, the past two years saw US aircraft carriers sent to participate in the war games. Indications are that no aircraft carriers will be present throughout these briefer operations. This once again will be seen as dialing back the stakes of the exercises, which in recent years have raised fear of war.