Administration reports on President Trump’s discussions with the Saudi Crown Prince neglected a major topic of discussion: Saudi Arabia’s nuclear ambitions. Subsequent reports reveal that the nuclear program was a topic of discussion, though to what extent still isn’t totally clear. 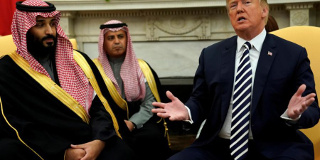 In recent days, the crown prince has talked openly of wanting nuclear arms “as soon as possible” if they believe Iran will get them. Saudi Arabia’s Foreign Minister Adel al-Jubeir confirmed this, and used virtually identical language in doing so.

Now Iran isn’t attempting to get nuclear weapons, but President Trump’s expected blowing up of the P5+1 nuclear deal could mean Iran withdraws its civilian program from certain obligations under the treaty, and that’s likely to set off a bunch of wild speculation that they are. The Saudis are clearly laying the groundwork for their own reaction.

Officials say President Trump is considering allowing Saudi Arabia to enrich its own uranium with US-made centrifuges. There is also talk of the US building nuclear reactors in Saudi Arabia. All this would purely be civilian use.

It’s not what Israel wants to hear, however, despite recent reports of their secret friendship with the Saudis. Prime Minister Benjamin Netanyahu, during his recent visit to the US, petitioned Trump and the Senate to block any Saudi nuclear program, and to ensure that the Saudis don’t get their hands on reactors.

It’s not clear how the US could’ve objected to the Saudis getting civilian nuclear access in and of itself. With top Saudi officials openly talking about acquiring nuclear arms, however, it’s clear that there is some risk associated with giving them centrifuges and know-how and turning them loose with what amounts to an American imprimatur to do whatever seems like a good idea at the time.