Most people may not draw an immediate connection between Salisbury and New York City.  US Ambassador Nikki Haley sees a direct route from the one to the other as part of a Russian chemical weapons plot for which no real evidence exists. 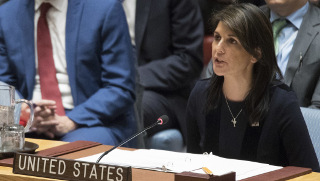 Speaking at an “emergency” UN Security Council session, Haley demanded “immediate, concrete measures” against the Russians based on Britain blaming them for poisonings in Salisbury. She claimed they amount to a chemical weapons attack, and UN credibility is at stake if a permanent council member can do that.

Haley then suggested that the next Russian attack would be against New York City, and that any other city in any other UN Security Council member nation was also a potential target for chemical weapons, unless unspecified actions are taken against Russia.

Russia criticized the “hysterical atmosphere” at the meeting, and has repeatedly denied involvement in the poisoning. Britain has not offered proof of their allegations against Russia, but Haley seemed contented to endorse it publicly.