In comments to reporters at the Oval Office Tuesday, President Trump appeared to be softening substantially on his position with respect to North Korea, talking up diplomatic progress and “very positive” statements coming out of both Koreas. 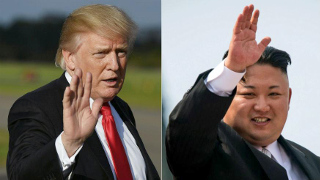 While everything he said pointed to this shift, even more was demonstrated with what he didn’t say, as Trump neither discussed preconditions for direct US-North Korea talks, nor appeared willing to set out such preconditions.

That’s huge, as previously all suggestions of North Korea offering talks were rebuffed with US demands that North Korea had to unilaterally denuclearize before any talks would even be considered. Trump himself was emphasizing this as recently as Saturday.

Now, by contrast, Trump is praising North Korea for its participation in the Winter Olympics, saying it was “terrific” and that they came in with “good spirit.” He even added that he was hoping to carry over that spirit.

This is a particularly good time for Trump to be changing his position toward diplomacy, as South Korea’s delegation wrapped up a visit to North Korea Tuesday, and will be heading to the US with proposals centering on trying to get bilateral talks going. That seemed before like an uphill battle for the delegation, but maybe not so much if President Trump remains in the more diplomatic humor demonstrated in this briefing.