Syria’s latest offensive in the Damascus suburb of Eastern Ghouta, which began last week, has been a violent continuation to a violent siege on the rebel-held area. President Bashar al-Assad says the offensive is going to continue in the name of fighting terrorism. 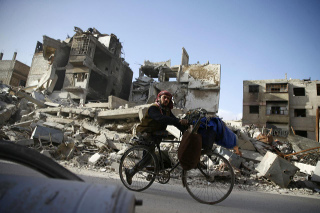 Territory is changing hands, however, with the Syrian Observatory for Human Rights claiming that the Syrian Army has taken roughly a quarter of what remained of the rebel enclave, with civilians fleeing deeper into the ever-shrinking area.

Eastern Ghouta has been rebel held virtually throughout the war, with Syrian forces having negotiated evacuation deals with some rebels along the outskirts last year, and now looking to clear the rest of it of rebel fighters. This area is the last substantial rebel holding this close to the capital city.

The hope had been that a recent ceasefire would ease the situation and give way to some sort of negotiated settlement, though the rebels have largely spurned the idea of evacuating the area, and the Assad government seems determined to resolve the situation militarily, in absence of a quick deal.