In a sign that Russian President Vladimir Putin may have decided he overstepped a bit in Thursday’s state of the nation address on nuclear armaments, other top Russian officials took to the media today to greatly downplay what was meant, chalking the matter up to a “misinterpreted” message by the West. 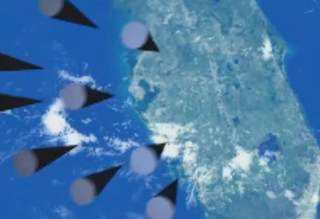 Putin had talked up Russia’s “invincible” nuclear weapons arsenal, including an animation that showed what was fairly obviously the Florida peninsula being attacked, and making clear Russian developments are meant to circumvent US missile defenses.

Yet Kremlin spokesman Dmitry Peskov claimed on Friday that the landmass wasn’t meant to represent anything, let alone any America state, saying the world had “missed the point” of Putin’s speech.

Instead, all Russian officials are now insisting the talk of nuclear weapons was “non-militaristic,” and that Putin was simply trying to emphasize that Russia retained “parity” with America’s own massive nuclear arsenal.

This new narrative is plainly a substantial change, with the Florida map obviously not a misinterpretation of the West. This suggests that Russia vastly underestimated what the reaction would be and is trying to manage that.