After a week and a half of strikes softening up the area, and killing large numbers of civilian bystanders, Syrian ground troops launched an offensive on Wednesday into the rebel enclave of Eastern Ghouta. 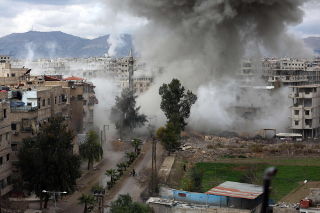 Eastern Ghouta, a suburb of the capital city of Damascus, is the last substantial rebel-held territory in the area, which has been under protracted siege, with Syria hoping to convince the rebels to abandon the area.

Fighting on the ground raged through Russia’s daily five-hour truce, though there is no sign Russia was involved. There were no airstrikes during the truce period, but heavy artillery began as soon as the truce window closed.

Russia had intended the truce window to allow civilians to evacuate the area, and for aid to flow in. So far there have been no aid inflows, with aid groups citing the fighting. It’s not clear if evacuations have happened at all, but no massive evacuations have been possible, with the Red Cross saying five hours was too short a time to enter and exit the area with so many checkpoints by so many rival factions.