Earlier this month, US officials started pushing for European nations to acquiesce to the idea of changing the Iran nuclear deal, warning President Trump would unilaterally withdraw from the deal in May if they don’t make progress toward that end. 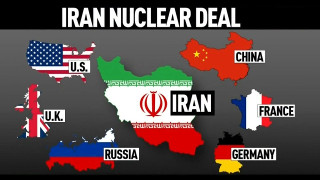 European officials are confirming that they are now trying to come to terms with the US on a “supplementary” to the nuclear deal, which only the US, France, Germany, and Britain would appear to be party to, which would nominally offer the Trump Administration some of the changes they’ve demanded.

European officials are resisting the demand for extending restrictions on civilian nuclear programs, and say that trying to revise the P5+1 deal itself would break the bargain they already reached with Iran, Russia, and China.

Yet a supplementary banning Iran from ballistic missile development which Iran isn’t a party to is seemingly pointless, and language on Iran needing to give the IAEA access to military sites is doubly pointless since, as the IAEA has repeatedly pointed out, Iran has given them access whenever they’ve asked and they don’t want any more access than they’ve already got.

Some European officials are openly expressing concerns that any deal they come up with to try to placate Trump will fail anyways, since President Trump is seen as so hostile to the nuclear deal in and of itself that he’d just come up with a new excuse.

Yet Europe may be imperiling the deal by even going down this road with the US in the first place, as once they accept the notion of new changes, it allows the US to keep issuing new demands, and will further convince Iran that the failure of European banks to participate in the deal as written is by design, and reflective of bad faith across the West.