For the second time this month, the Taliban forces in Afghanistan have issued a public statement urging the US to agree to talks seeking a “peaceful solution” to the 16+ year long US occupation of Afghanistan. 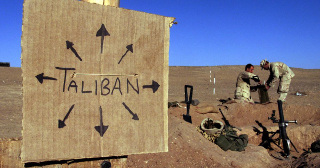 The Taliban statement said it believes that the “legitimate demands of the Afghan people” need to be considered, and the US should address its own concerns “through a peaceful channel.”

Late in January, President Trump declared himself to be unwilling to talk with the Taliban, saying that talks would not be possible for “a long time.” This comes amid a flurry of reports on the war, showing it’s going very poorly for the US.

This is likely a big reason why the US is unwilling to talk, believing they are in a weak military position which would preclude them from getting a favorable settlement. The Taliban, by extension, would see itself in a favorable position for making a deal.

On top of that, though, the Taliban’s repeated offers of talks are likely a way to further needle the US about their vulnerable position in Afghanistan, and to further underscore that the US is continuing an unwinnable war when talks are available to be had.