Throughout Saturday and Sunday, Israeli warplanes have been pounding the Gaza Strip, with officials reporting strikes against 18 separate targets overnight. Two civilians were reported killed, both teenagers in Rafah hit by tank fire. 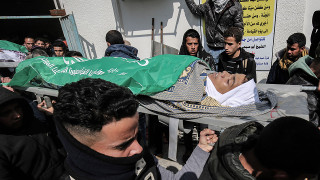 The attacks started after a bombing at the Gaza-Israel border. Israeli Army officials say Palestinians rose a flag inside Gaza, but near the border, and planted an explosive device on it. The device detonated when Israeli troops crossed into Gaza after the flag.

Israel reported all the places attacked in Gaza as “terror targets,” despite killing civilians. A pair of rockets were said to have been fired, with one doing some damage to the roof of an Israeli house and the other doing nothing.

Israeli media described the attacks as the heaviest fighting in years, and officials played up the idea that Israel would carry out more attacks in the days to come. Israel and Hamas both issued statements blaming the other side fully for the violence.