Weeks of diplomatic efforts with North Korea have the South Korean government upbeat, and presenting the Winter Olympics as the next step toward even better bilateral ties, and new opportunities to come. 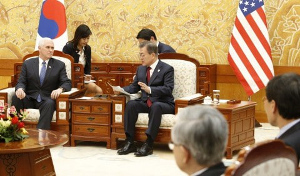 While the US had previously been loathe to publicly clash with South Korea about the matter, the fact that the diplomacy is ongoing is clearly irking the administration, and has them now openly taking an opposite position to the South.

Where South Korea sees opportunities to improve ties, Vice President Mike Pence is very clear that he sees an opportunity to worsen them. South Korea seeks sports diplomacy at the Winter Olympics, and Pence wants to use it as a pretext for more sanctions and acrimony.

This public split is casting a long shadow over the Olympic games, where South Korea will have to manage Pence’s visit while also trying to keep him from doing too much damage to their diplomatic efforts.