Israeli warplanes flying out of Lebanese airspace carried out a series of attacks against a Syrian military research base in Jamraya overnight, with a number of missiles hitting the base and causing substantial damage. 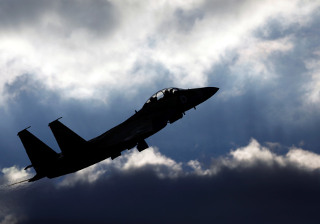 This is the second time in three months this base has been attacked by the Israelis, and once again came without any formal explanation. Israeli media, however, styled the site “an Iranian base” and suggested it was about killing Iranians.

Syria’s own state media was pretty clear about it being a Syrian base, however, noting that their own air defenses were positioned near the base and managed to intercept several of the missiles fired, though all indications are there were still many that hit their targets.

Syrian officials say they hold Israel “fully responsible” for the attacks, but it’s rare for them to do anything about such strikes. Israel’s military issued a statement saying they don’t respond to reports of their overseas strikes, though they do occasionally bend this rule to brag about particularly large attacks on the Syrians.

5 thoughts on “Israel Warplanes Attack Syrian Base Near Damascus”