The White House is reportedly pressing the Pentagon to provide more options for different plans for attacking North Korea militarily. Officials are said to be frustrated by the limited choices offered by the Pentagon, and want more different options. 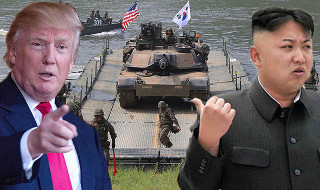 Said to be at the head of this push for more options is National Security Adviser H.R. McMaster, who is telling President Trump that for his repeated threats to attack North Korea to be credible, the US needs to have even more plans to attack them.

Pentagon officials are said to be averse to providing any more options than they already had, saying they believe the White House is scrambling to hastily toward war in the first place. They say the more options they give Trump, the bigger the risk he’d use one.

While some reports have suggested a US attack could be imminent, special envoy Joseph Yun said in his own comments in Tokyo on Thursday he doesn’t think such an attack is likely soon.

If officials want more options, that may suggest they’re dissatisfied with the ones they have, any that such an attack isn’t imminent.