Vice Chairman of the Joint Chiefs of Staff Gen. Paul Selva echoed Defense Secretary James Mattis’ attempts to downplay North Korea’s ability to strike US sites with their ICBMs, saying that North Korea hasn’t directly demonstrated every single component of a functional ICBM, and thus the US can’t conclude that they necessarily have one. 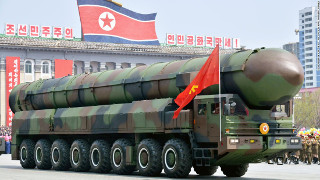 This is true, of course, as North Korea hasn’t physically targeted anyplace with a nuclear warhead, which means we don’t know for sure they could reliably hit such a target, nor that the warhead would necessarily survive reentry.

Gen. Selva warned, however, that the North Koreans might well have such capability, and their mobile launchers mean the US might have no more than a few minutes notice if a launch was carried out.

Selva expressed confidence that the US can destroy “most” of North Korea’s infrastructure in a preemptive attack, though that clearly is distinct from “all,” and North Korea’s ability to retaliate against a US attack remains very much a substantial risk. Efforts by officials to downplay North Korea’s capabilities have been raising concerns the US is continuing to plot such an attack.

4 thoughts on “Top US General: North Korea Hasn’t Demonstrated All Components of ICBM”