The historical capital city of South Yemen, the port city of Aden, has fallen to southern separatists on Tuesday, ending just over 48 hours of fighting in and around the city, and giving the UAE-backed group de facto control over the city. 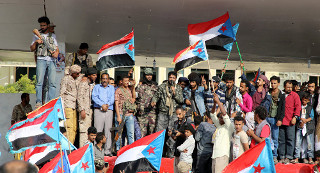 The pro-Saudi government, nominally headed by Abd Rabbu Mansour Hadi, who is under house arrest in Saudi Arabia at any rate, is holed up in the presidential palace in Aden, and the Saudi-led coalition has advised them to negotiate instead of expecting the coalition to retake the city for them.

Yemen was unified militarily in 1990 after a protracted war, but an active secessionist movement remained in and around Aden ever since, and they appear to have finally found an opening to reassert themselves.

The current battle lines in Yemen are close to the same as the old border between North and South Yemen, and the rise of the secessionists might provide an opportunity to end the disastrous Saudi War by simply allowing Yemen to divide in half once again.