The past week in Afghanistan has been one of the deadliest in years, with several major Taliban attacks across the country, including major strikes in the capital city of Kabul, killing hundreds of people. 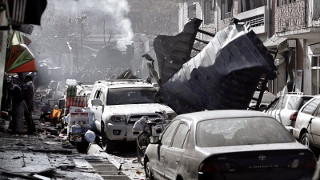 Last Monday, Taliban stormed a luxury hotel, killing 22. Days later, ISIS hit the charity Save the Children in Nangarhar, chasing the group out of the country. Over the weekend, a Taliban ambulance bomb killed at least another 103 and wounded hundreds more. This Monday, another 11 troops were killed in Kabul.

Afghan security forces appear totally unready for such major attacks, even in what are nominally their most secure cities, and the massive US escalation in Afghanistan has clearly not put the militants on the defensive, far from it.

The Afghan War has been going badly for years, and this latest week is a testament to just how bad things have gotten. President Trump is even ruling out diplomacy at this point, which may suggest he believes the US is in too weak of a position to negotiate.

Yet the situation isn’t getting any better, and the US doesn’t appear to have any plans for the war beyond just throwing more troops at it, something which so far hasn’t accomplished much of anything.