Ahmed bin Dagher, the prime minister of the Saudi-backed Hadi government in Yemen, has issued a desperate plea for Saudi help this weekend, as their forces were quickly routed in their interim capital of Aden, and the government headquarters seized. 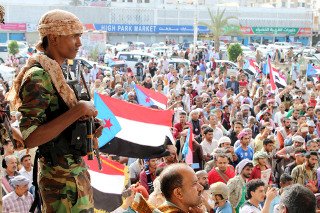 Interestingly, this is totally separate from the Saudi-led war trying to reinstall this faction as Yemen’s government, and marks a major split in the Saudi coalition, with the attacking faction a southern secessionist movement which is backed by the United Arab Emirates.

Yemen was militarily unified in 1990, when North Yemen conquered the former South Yemen. Since then, secessionists have remained active in the south, though rarely in a position to really assert themselves in a serious way.

The Saudis were keen to reinstall a Sunni-dominated government with their invasion in 2015, but the Hadi government’s increasing reliance on the Muslim Brotherhood, and the war’s length, has convinced some that Yemen is heading for a split. The UAE appears to believe that they may as well just back the separatists in the first place.

A victory for a separatists might go a long way toward ending the Yemen War, as the battle lines between pro-Saudi forces and the Shi’ite Houthis are remarkably close to the old borders between North and South Yemen. Ending the war with a de facto and de jure split might be the simplest way for everyone to extricate themselves from a conflict that’s gotten far out of hand, and is causing humanitarian disasters left and right.