With both nations upbeat after recent bilateral talks, and sports diplomacy surrounding the Winter Olympics, North Korea has issued a very unusual statement of unity addressed not to South Korea, but to all Koreans across the world. 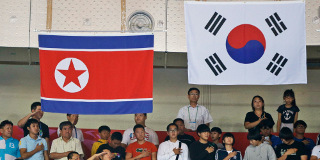 North Korea called for all Koreans “at home and abroad” to work together on a breakthrough toward unification of the Korean Peninsula, saying it should be done without the help of other countries.

The statement urged a push for bilateral cooperation, and to encourage increased contact and travel between the Koreas. That’s a particularly surprising call, as generally North Korea does not allow its citizens to travel abroad for fear of defection.

The statement did touch of some common topics, including the concern about military tensions, which they attributed to military drills with “outside forces.” The push for the Koreans to work together without outside involvement is clearly directed at the US, though it is somewhat surprising how broad it is given North Korea’s recent attempts to get Russia to mediate talks for them.

Either way, North Korea’s statement clearly is a testament to how upbeat they are after the recent talks in the demilitarized zone, and how hopeful they are that talks starting with them attending the Winter Olympics could well expand into something much bigger.

That said, this is almost certain to provoke a negative response from the US. The Trump Administration wasn’t thrilled with the talks, and has already committed Vice President Mike Pence to the Winter Olympics to undermine North Korea’s diplomatic push.