In a statement today, US coalition spokesman Col. Ryan Dillon reported on a massive US airstrike against the eastern Syrian town of Sharah, hitting what is claimed to be “ISIS headquarters.” 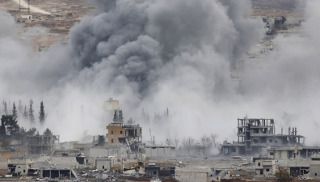 The attack, which took place on Saturday and appears not to have been reported until today, must’ve been massive, as Col. Dillon claimed it had killed 150 ISIS fighters within the “headquarters.”

Dillon added that the headquarters had been under constant surveillance, and that the US believes it was impossible for any civilians to have been killed in the attack, meaning they are certain all the slain were “fighters.”

Of course, there is little evidence that is actually the case, but it is in keeping with the Pentagon’s long-standing determination to preclude the idea of civilian casualties before taking any serious look at the identities of their airstrikes, and then dismiss any reports that emerge later as “not credible.”