The SDF, the umbrella group dominated by the Kurdish YPG, has reported on Monday that they are openly studying the possibility of sending reinforcements into the Afrin District of northern Syria, aiming to support the defense of the district. 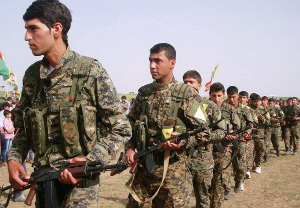 Over the weekend, Turkey attacked the Afrin District, which is the western-most Kurdish-held district in Syria. Turkish officials have suggested that this is just the start of a broader invasion of the Syrian Kurdistan.

Having talked up the invasion well in advance, Turkey gave the YPG time to mobilize a lot of defenses in Afrin. Still, the invasion by Turkey, and some 25,000 Turkish-backed rebels may have them deciding that they need reinforcements.

This is especially true because Kurdish officials say they intend to launch a substantial counterattack against Turkey, and the SDF may decide they want to commit those forces to the battle sooner rather than later.