Negotiations this month between North and South Korea have borne fruit in the form of a last minute agreement to participate in the Winter Olympics, with North Korea now planning to send 22 participants. 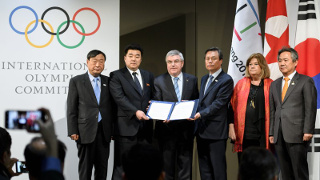 It’s more than just Olympic participation, of course. South Korean officials have made clear they see this as a catalyst for general improvements in bilateral relations, and North Korea appears to agree, with the two sides agreeing to a joint team, and marching together at the Olympics ceremony.

That seems to be the way things are going generally, with North Korea having also sent a pop singer to South Korea in a sign of good will, and getting a huge positive reaction in the South.

Cultural exchanges, along with friendly athletic competition, is an important way to boost relations, giving the general public some investment in seeing an improved relationship in the long term.

5 thoughts on “Olympics a Catalyst for Easing Korea Tensions”