Turkish troops continue to mass at the Syrian border Friday, with artillery fire from their positions pounding Kurdish YPG forces in the Syrian Afrin District, and Turkish DM Nurettin Canikli saying this is the “de facto start” of a full-scale Syrian invasion of Kurdish territory. 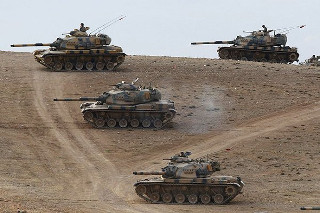 Turkish officials have threatened this invasion off and on for months, and earlier this week said it was imminent. Canikli says now there is “no turning back” and that the invasion is in progress.

Turkey has long presented the Kurdish YPG as “terrorists,” and insisted they will not allow them to retain territory west of the Euphrates River. To this end, President Erdogan says Turkey will attack Afrin first, then Manbij.

Other Turkish officials, however, say they consider it unacceptable for the YPG to retain any territory near the Turkish border at all, which means nearly all of their territory is at risk from this ongoing operation.

Since Turkey has installed allied rebel groups into areas they’ve seized in Syria before, the risk of them taking YPG territory, about 25% of Syria, and doing the same thing has caught the attention of the Syrian government, which is threatening action to support the Kurds, including shooting down raiding Turkish warplanes. The US has also opposed the Turkish attack, though it’s not clear they intend to do anything about it.

32 thoughts on “Turkey Escalates Shelling, Says ‘No Turning Back’ From Syria Invasion”