For the second time this week, Russian Foreign Minister Sergey Lavrov has accused the US of taking measures that risk splitting Syria, saying that the US is setting up “alternative bodies off authority” in the country. 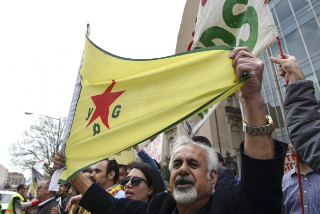 Lavrov added this move was in direct contradiction to the long-standing US position on Syria, which is that the nation must retain its territorial integrity and must have a strong central government with no autonomous regions.

Russia had proposed earlier in the Syrian War that some autonomy could be given to breakaway regions to reduce tensions, and this was loudly spurned by the US. Yet the US-backed Kurds have established a massive autonomous region, and the US has been shoring up their control over that region.

Earlier this week, Lavrov was more direct in responding to a US announcement about creating a 30,000-strong force for the Kurds, saying that the effort to further strengthen the region was likely to lead to an outright split of Syria.

13 thoughts on “Russia FM: US Creating ‘Alternative Bodies of Authority’ in Syria”