Earlier in the week, Turkey indicated that an invasion of Syrian Kurdistan could happen “at any moment,” to the point that the YPG was mobilizing civilians in Afrin District to prepare a last ditch defense. Turkish officials appear to be backing off that threat, at least somewhat. 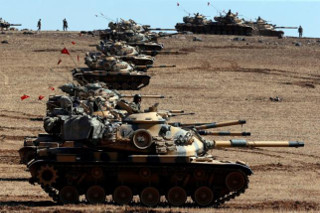 Now, instead of making the attack a foregone conclusion, Turkey is conditioning the attack on a demand that the US withdraw all support for the Kurdish YPG, as well as abandon plans to create a new border force in Syrian Kurdistan.

This change suggests that Turkey believes there is at least a possibility that the US will finally back off their long-standing support for the Kurdish YPG, though it comes amid Secretary of State Rex Tillerson’s comments on US presence there being “open-ended,” and such a presence virtually requires the YPG supporting that presence, particularly with Syria’s central government repeatedly calling the US unwelcome.

The Pentagon sought to try to deflect opposition to the border force with its own statement Wednesday, saying that the US was neither creating a new army nor a conventional border guard, despite officials having repeatedly referred to the new force as both in previous comments.

The new force was presented initially as deploying along the Syria-Turkey border, and being constituted overwhelmingly of Kurdish fighters. Pentagon officials are now suggesting they will be positioned in areas near former ISIS territory, nominally to ensure that ISIS can’t reemerge.