The 20+ nations in Vancouver talking about North Korea repeatedly heard the same message from US officials: pay no attention to the bilateral talks between North and South Korea, with officials suggesting they not be “fooled” by the talks and suggesting that nothing would come of them. 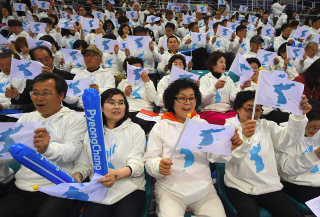 That’s a problem for the US though, because something is coming of those talks. North and South Korea may have generations of mistrust to work through, but made big progress in just a few meetings, agreeing to march unified at next month’s Winter Olympic, and even field a common team for ice hockey.

Significant reconciliation on the Korean Peninsula seems to be happening, and it’s a big blow to Trump Administration strategy, which has centered on isolating North Korea and presenting the whole world, beyond China and Russia of course, as unified against them.

If even South Korea sees the merits of diplomacy in the face of US talk of military action, the US unwillingness to engage in direct talks with North Korea looks all the more like the real aberration in the region, and a real blow to presenting North Korea as impossible to talk to.

White House officials continue to try to spin the bilateral Korea talks as some sort of trick, saying they believe North Korea’s goal is to “evict” US troops from South Korea. Yet so far, the signs are that this sort of issue hasn’t even been broached at the actual talks.

Indeed, North Korea has tried to keep the talks very limited so far, focused on confidence-building and a general rapport, necessary since the two nations hadn’t talked in over two years. Their long-term goal is to prevent a US attack, and right now its not clear South Korea can offer that assurance to them, but the more these talks progress, the less justification the US will have for not coming to the table.