The Syrian Foreign Ministry has responded negatively to the US pledge to create a new “border” force in northern Syria of some 30,000 US-backed fighters, saying not only are they violating Syrian sovereignty, but the Syrian Army’s goal must be to end the US presence in the country outright. 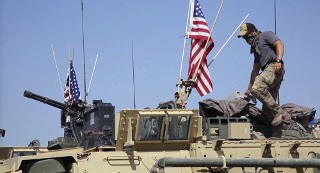 Syria has long opposed the US military presence in the country, which was deployed without Syrian permission, and which Pentagon officials say will last long after the outright defeat of ISIS.

Whether the Syrians can do anything about it is another matter. The US presence in Syria is substantial, and backed by a large, heavily-armed Kurdish force. Despite the US deployment being plainly illegal, there’s no practical way to remove them by force.

It’s curious that the Syrian state media made it clear the position was that of the military, as made by the foreign ministry, suggesting the two ministries may not necessarily be on the same page with rhetoric about the US presence.