While the latest UN report on Yemen hasn’t been released to the public, Friday’s report that it faulted Iran for not preventing weapons transfers to Yemen appears to have glossed over much of the document,focused on the harm done to civilians overall in the conflict. 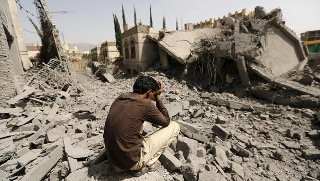 The 79-page report warned that Yemen is rapidly disintegrating into a collection of warring statelets, and warned it would be difficult for them to ever reunite after this conflict. It heavily faulted Saudi Arabia for its airstrikes, killing thousands of civilians.

The panel estimated some 8 million Yemenis, about a third of the population, are facing famine conditions, and noted that around one million Yemenis were victims of a cholera epidemic which has been called the worst in human history.

The report did indeed note the Iranian missile issue, in the context of concerns Houthi strikes on Saudi Arabia could expand the war regionally. The panel was unable to conclude who provided the missiles, or how they got to Yemen, however, and merely faulted the Iranian government for not having managed to somehow stop them.

While the Iran angle is likely to be the topic of choice for the US in the days to come, even after the whole report comes out, it is clear the bulk of the effort was directed at internal factions, along with the Saudi-led coalition, who they warned was backing so many different factions that are at odds with the Hadi government they’re trying to prop up that they’re assuring Yemen will remain divided for years.