During the bilateral talks between North and South Korea this week, the US Air Force deployed three nuclear-capable B-2 Spirit bombers to Guam, along with some 200 airmen. The Guam base has long been seen as the likely staging area for US attacks against North Korea. 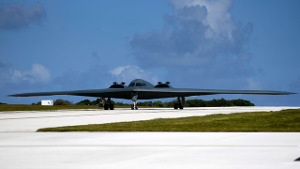 Adding context to this deployment, while the US never formally objected to the talks, there were reports at the time that the Trump Administration was debating carrying out a “limited” sneak attack against North Korea.

Though the reports on the attack suggested it was likely to be in the future, likely during the Winter Olympics, the deployment of the US warplanes has doubtless added to military tensions on the Korean Peninsula, even as the negotiations sought to ease them somewhat.

Putting nuclear-capable bombers in Guam on the eve on the Winter Olympics, and immediately after President Trump bragged about his nuclear button doubtless will further inflame concerns throughout the region, and serious fear of a war breaking out.