With the US forever investing more into their nuclear arsenal, ensuring they have the world’s biggest collection of city destroying arms, the fact that none have been used in over 70 years is a silver lining to many, but within the administration, it may be a problem that needs correcting. 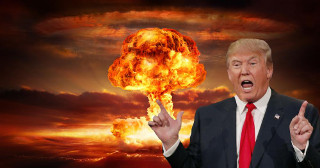 Administration officials are now said to both be hard at work acquiring smaller, more “usable” nuclear weapons, and radically changing the rules of engagement with respect to a US nuclear first strike, so that such attacks are more possible in the future.

While some nuclear powers have ruled out ever launching a first strike, the US has long refused to make such a position, with President Obama’s brief consideration of such a pledge quickly panned as making the US “look weak.”

Even without the pledge, the current crop of arms are for all intents and purposes unusable except in an extinction-level nuclear exchange. Such a strike would simply be too big, and too much of a humanitarian disaster to seriously contemplate.

Which is where these smaller nuclear arms come in. Pentagon officials see the introduction of more tactical nuclear arms as a way to build arms that are usable at a much lower threshold, and seem to be shrugging off concerns that this will effectively normalize nuclear warfare.