The constant bane of those trumpeting the call for war with Iran reared its head earlier this week in the curious form of Israeli military chief Lt. Gen. Benny Gantz, who pointed out that Iran isn’t actually developing a nuclear weapon and went on to say that it was very unlikely the nation would ever try. 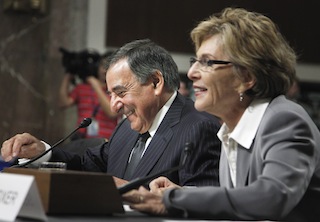 Such comments may have the war party on their heels, but never for long as today both US Defense Secretary Leon Panetta and his Israeli counterpart Ehud Barak struck back with comments intended to raise fears about Iran’s non-existent weapons program.

Barak insisted that the upcoming May talks in Baghdad, aimed at a negotiated settlement with Iran, had no serious chance of succeeding, while likening Iran to nuclear weapons states like North Korea and Pakistan.

Panetta’s comments were more directly confrontational to Gantz, saying that he hopes “he knows something more than I do” and insisting that he has no specific information to suggest Iran isn’t developing nuclear weapons.

14 thoughts on “Panetta, Barak Aim to Stoke Fears About Iran”