With rescue operations continuing, officials are increasingly conceding that it is likely that most if not all of the 138 Pakistani soldiers buried in an avalanche at Siachen Glacier have died. 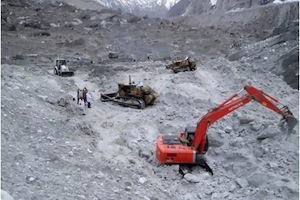 The catastrophe has been an opportunity for the US to deploy a small number of rescue troops as a sign of good will, and also a chance to publicize the environmental consequences of the military standoff. Analysts, however, are also keen to push for a pullout from the region, pointing out how utterly useless the operation has been.

Despite being hotly contested by both India and Pakistan, Siachen is completely empty. It has no people and no resources, and it isn’t even of strategic value. That the glacier remains contested at all is a product of sheer coincidence combined with the momentum of the endless Pakistan-India tensions.

Experts say that in practice, the two sides could easily just demilitarize the whole region with no real risk. Even if no agreement to do that could be reached, there would be no practical reason one side or the other couldn’t simply do so unilaterally.

One thought on “Analysts Push for Withdrawal From Worthless Siachen Glacier”