Following a high profile summit today in Dakar, Senegal, the Economic Community of Western African States (ECOWAS) has announced a full scale embargo on neighboring Mali, sealing all the borders of the landlocked nation to the outside world in retaliation for the military’s recent coup d’etat. 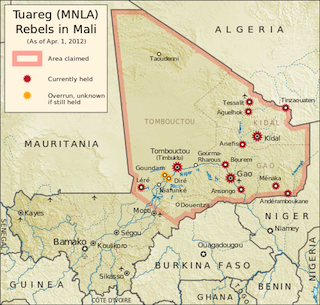 In addition to closing the borders, ECOWAS will freeze all the assets of the Malian central bank, and will halt all imports to the country. Since Mali produces literally no oil of its own, it relies entirely on imports from the Ivory Coast for its energy needs. The nation’s electricity production is partially hydroelectric in nature, but is likely to still leave the nation in a situation of rolling blackouts.

ECOWAS also announced that they are mobilizing a regional military force after the meeting, but exactly to what end was not readily apparent.

Though the coup in the official reason for the sanctions, they may also been an effort to effectively quarantine Mali for the duration of its ongoing secessionist war. The National Movement for the Liberation of Azawad (NMLA), a Tuareg rebel faction, has seized the entire northern half of the country, and while officially they seek only that region there has been speculation that they will eventually seek to incorporate Tuareg-heavy regions in neighboring nations into Azawad.

The Mali junta has promised to hold fresh elections soon, but their calls for international military aid to crush the Tuaregs is likely to be stalled indefinitely while the embargo is in place.