Speaking today on the Senate floor, Senator John McCain (R – AZ) demanded that the United States launch an immediate war against Syria, starting with air strikes across the northern half of the country. 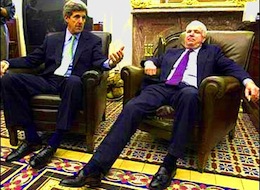 Just two weeks ago McCain was on TV calling for the US to start providing arms to Syria’s rebel faction, in particular the Free Syrian Army (FSA). In today’s speech he insisted that the “only realistic way” to aid the FSA was a war.

McCain claimed to be in contact with the Syrian National Council (SNC), a Turkish-based faction that styles itself the leaders of the rebel movement, and said that a US bombing campaign would give rebel forces a chance to plan new military advances against the Assad regime.

McCain further predicted that Syria’s neighbors would join the nation’s civil war “with or without the US,” though other than Turkey, none of Syria’s neighbors has expressed any particular interest in intervention.

30 thoughts on “McCain Demands Immediate US War on Syria”