The march to a US war with Syria appears to be picking up pace considerably today, with Sens. John McCain (R – AZ) and Lindsey Graham (R – SC), the usual advocates for any given war, loudly calling for the US to begin arming Syrian rebel factions. 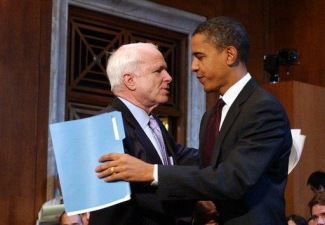 McCain insisted that the rebel factions “deserve” weapons and that there would be ways for the US to funnel the arms into Syria indirectly. He suggested “third world countries” could be used to transfer the weapons to avoid “giving the appearance that the United States is trying to intervene in Syria,” which perhaps would’ve worked better if he wasn’t publicly announcing those intentions on national television.

Sen. Graham added that destroying the current Syrian government for having ties with Iran was a perfectly good reason, saying that ousting Assad was “as important to containing a nuclear Iran as sanctions.”

Exactly what aid the US providing and to which rebel factions is unclear, but former US diplomat Walid Maalouf said he is aware of ongoing secret aid transfers, and that the US appears to favor the Syrian National Council (SNC) faction.