According to a breaking story in tonight’s Jerusalem Post, Israel’s state rabbinical authority has Häagen-Dazs ice cream, a popular US-made premium brand, is not kosher and that stores which sell the ice cream in defiance of the ruling face the revocation of their religious licenses as officials “clean” stores. 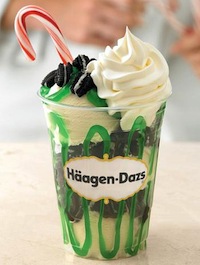 Interestingly, Häagen-Dazs itself was founded by Polish-Jewish immigrants to the United States, who used the Danish-sounding name as a marketing tool because they believed Danes to be associated with dairy products.

But the company, now a subsidiary of General Mills, has run afoul of Israeli rabbis over its use of liquid milk instead of milk powder, since many of the dairy farmers producing the milk are not Jewish and don’t have rabbis hanging out on their farms all the time supervising them.

This is an issue, the official notice warns, because “sages” have issued a ban on the consumption of non-Jewish farmers’ milk unless it was supervised, fearing that “it may be adulterated with milk from a non-kosher animal.”

Of course, non-kosher animal milk is not commonly used in the United States in the first place, with the only example being the relatively uncommon sale of camel milk, a much more expensive alternative to cow’s milk. Still, the threat that such milk may get snuck into Häagen-Dazs ice cream for some inscrutable reason threatens the company’s ability to continue selling its product in Israel.