After a disappointing fifth place finish in the Iowa Caucuses, Gov. Rick Perry of Texas is looking to build some momentum to salvage his campaign and, as is so often the case with candidates, is looking to do so with hawkish policy statements. 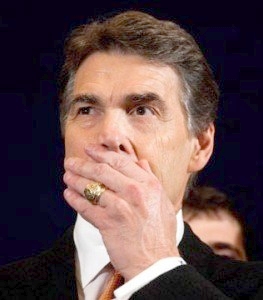 But while other candidates have focused on starting new wars, usually in Iran, Gov. Perry promised to re-start an old war, saying that not only did he believe withdrawing from Iraq was a “huge error” but that if elected he would reinvade.

Predicting that Iran would enter Iraq “literally at the speed of light,” Perry insisted it was vital to send troops back into the country, though at such a speed Iran would be able to travel from its own border to the Jordanian border on the other side of Iraq within 1.6 microseconds, so the opportunity to response would be extremely limited.

Perry’s strategist sought to redefine the governor’s comments, saying that sending massive amounts of troops back into Iraq is “not an invasion, that’s common sense.” It isn’t clear however what makes it “not an invasion.”

Legally, a Perry Administration could invade Iraq pretty much at will, as the 2002 authorization to invade Iraq remains on the book and appears to be interpreted by many as giving future presidents automatic permission to restart the war whenever they want. An effort in the Senate to revoke the authorization, led by Sen. Rand Paul (R – KY) failed in November.

24 thoughts on “Gov. Perry Vows to Reinvade Iraq if Elected”