Crude oil prices are approaching an 8-month high tonight following the announcement that the European Union has issued a full ban on all imports of Iranian crude oil, with expectations that the London Brent spot price, currently at $113, could rapidly see $125 on the ban. 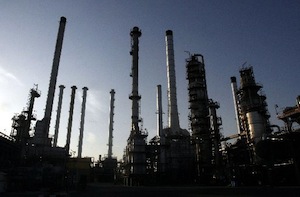 EU officials say that the opposition to the ban has evaporated and that the debate is now moving on to the exact details of it, with the US State Department saying the move will “tighten the noose on Iran economically.”

The announcement is expected to happen by the end of the month, according to French Foreign Minister Alain Juppe. The move will force Italy, Greece and Spain to find new sources of supply.

Whether it will have a serious impact on Iran is unclear, as they will likely just sell the oil to Asian powers instead, and the only change will be in the efficiency of trade routes. China in particular has been keen to secure Iranian oil supplies.