The Obama Administration has released a statement today announcing that a $30 billion arms sale to Saudi Arabia has been finalized, which will involve selling 84 F-15 fighter jets as part of a “modernization deal.” 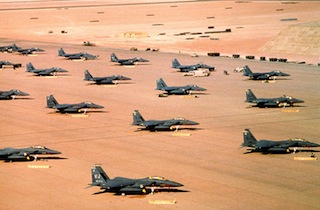 Officials were quick to cheer the deal, saying it “will positively impact the US economy” and that it wouldn’t harm Israel, adding that “all sales to the region must be evaluated for the impact on Israel.”

The real question, however, is why Saudi Arabia is bothering to spend such massive amounts of money on US weaponry that is of no obvious use to them, Saudi foreign intervention mostly involving deploying ground troops to tiny neighbors to help crush popular uprisings.

Some official comments suggested it was something to do with Iran, but no one seriously expects the Saudis to attack Iran, or vice versa, and it seems unlikely that if a war did break out it would involve epic dogfights between the Saudi F-15s and Iranian MiG-29s.

Rather the sales of hugely expensive warplanes to Gulf nations appears to be more a question of national prestige than utility, with the Obama Administration pushing the sales in the hopes of following through on promises to increase America’s arms sales abroad.