Iraqi Prime Minister Nouri al-Maliki has made little secret of his efforts at centralizing government power under his control, refusing to appoint a permanent defense minister or interior minister in an effort to ensure that all national government forces answer to him directly. 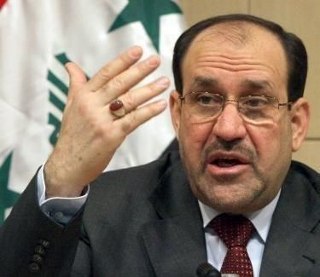 But the move seems to be picking up the pace considerable today, with reports that Maliki ordered the nation’s Vice President Tareq al-Hashemi, the top ranking Sunni official in the nation, taken off a plane and detained.

The detention at the time was relatively short, but officials now say that Maliki is gathering confessions with an eye toward charging Hashemi as a terrorist, a move that would almost certainly fuel a huge sectarian backlash.

Deputy Prime Minister Saleh al-Mutlaq, another top Sunni in the Iraqiya bloc, warned only last week about Maliki’s designs on dictatorhood, and while he insisted that Iraqiya was staying in the government to avoid being targeted for arrest, it seems this may no longer be a guarantee. Mutlaq was also an opponent of the Maliki regime, with the prime minister’s coalition aiming to prevent him from participating in the last election.