Speaking today at a press conference in Brussels, Secretary of State Hillary Clinton rehashed the same claims about the NATO missile shield that haven’t been convincing Russia for the past decade, while insisting they will “press forward” on the scheme. 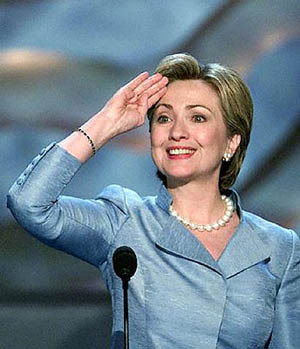 “This is not directed at Russia, it is not about Russia. It is frankly about Iran,” insisted Clinton. Such claims have not convinced Russia, which couldn’t help but notice that the bulk of the system is being built outside of Iran’s missile range, and much of it is positioned along the Russian frontier in eastern Europe.

Russian officials warned yesterday that the stalemate in talks could lead to a new Cold War-style nuclear arms race with NATO, as they scramble to position more weapons in the exclave of Kaliningrad to counter the missile capabilities.

The more pressing threat, however, came last week when Russia threatened to close their borders to NATO war supplies over the dispute. With Pakistan already blocking the southern border, Russia could effectively block all supplies from entering Afghanistan by land and leave some 140,000 NATO occupation forces relying solely on airlifts for supplies.