They never remember to turn off the microphone.

In one of the most bizarre stories in recent memory, French President Nicolas Sarkozy and US President Barack Obama were caught making catty comments about Israeli Prime Minister Benjamin Netanyahu in a “private” moment at the G20 conference. 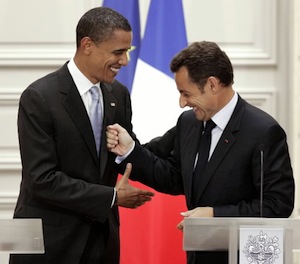 “I cannot stand him. He is a liar,” declared Sarkozy, speaking to Obama in one of the private rooms but having left his microphone running for all the media to hear. “You’re fed up with him?!” remarked Obama, “I have to deal with him every day!”

The conversation continued for nearly three minutes before the microphones were shut off, but incredibly went mostly uncovered by major media outlets in the wake of the conference. Reports that the members of the media on-hand were made to sign an agreement not to report the story have not been confirmed, but one journalist present said there was a “discussion” held after the gaffe and everyone “agreed not to publish the comments due to the sensitivity of the issue.”

The bumbling attempt at covering it up worked for a few days, with no major outlet covering the scandal after the Thursday talks. They only came to light today when media watchdog Arret sur images covered the gaffe, along with the efforts to “intimidate” the press into not covering it. Incredibly, those present were quick to confirm that they were cowed into not covering it.